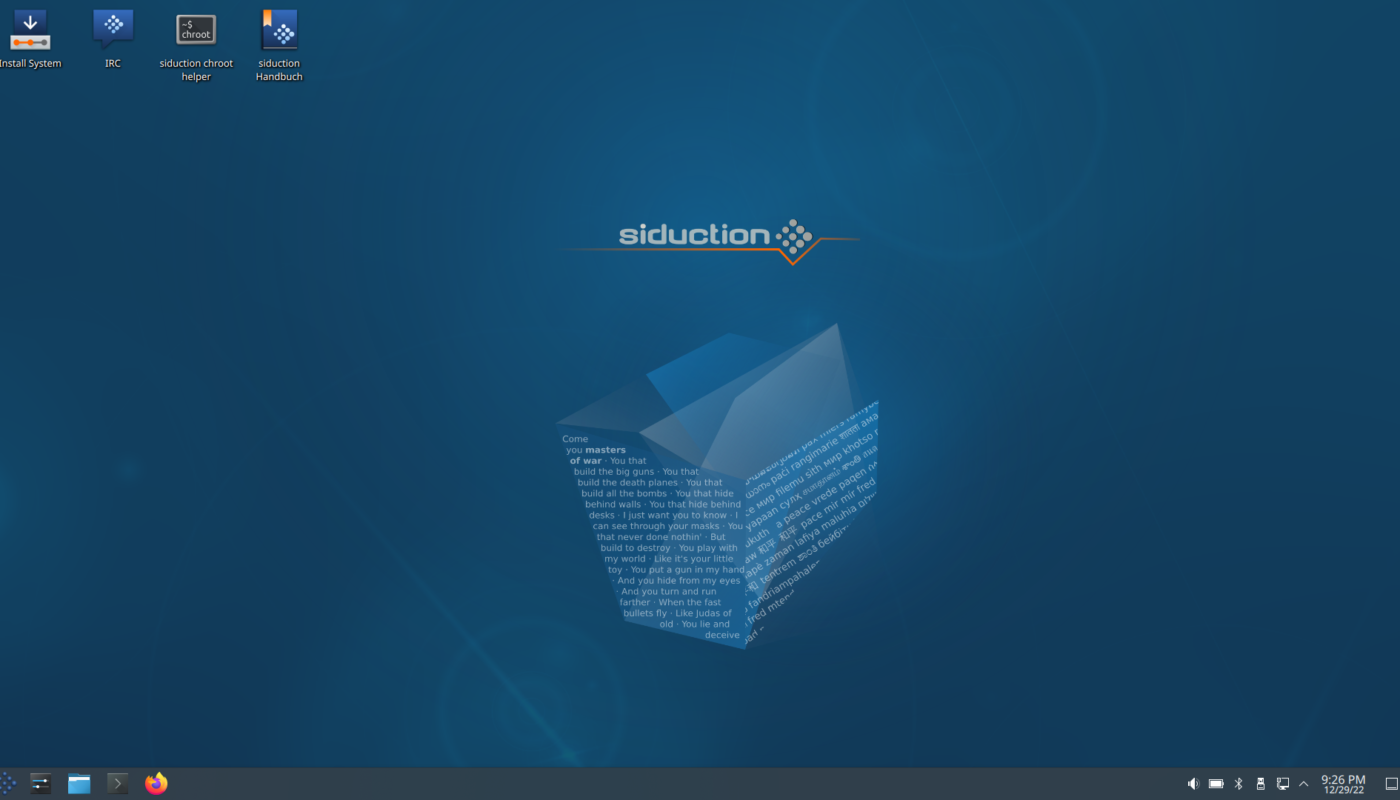 During holiday season we present to you our new release siduction 2022.1. This edition for obvious reasons has been given the code name »Masters of War«. This goes back to a Bob Dylan song of the same name from 1962. Users that have been with us for a while will remember that we used to use rock songs as code names for our releases. Well, today we are returning to that tradition. The wallpaper of this release combines the artwork for Debian GNU/Linux 12 »Bookworm« with this Bob Dylan song, that is as fresh today as it was in 1962.

The User and password for the live session are siducer/live.

With that out of the way, let’s cut to the chase. »Masters of War« has quite a few new features to offer that we hope you will find exiting enough to try out. But before that, let’s get to the basics first. »Masters of War« uses Linux 6.1 as kernel and offers images with KDE Plasma as our main offering, along with LXQt, Xfce, Xorg and noX. We will continue to offer unofficial builds for GNOME, Cinnamon and MATE on testbuilds.siduction.org.

Why we don’t ship as many desktops as we did

Should you wonder why we don’t ship, GNOME, Cinnamon, or MATE anymore, the reason is simple: We don’t have the time nor the respective intimate knowledge to keep those desktop environments in the shape they deserve to be released to you. If you think, siduction should again ship one of those desktops, and you have the resources to help us do that, we are more than happy to support you in any way possible. Please help us to secure the future of siduction by stepping up and helping us out in different capacities.

Generally speaking, siduction is what you make of it, as it is a community effort. And with our small team most of the time we’re in the situation that we would like to offer more to our users. No matter if you have ideas, clever solutions to scratch a personal itch or beautiful artwork gathering dust on your hard drive – this is your chance to join us and contribute!

Getting started couldn’t be easier:

If you are unsure where to put something or if you would like to chat with other users, joining IRC or the attached Matrix rooms is always an easy way to go. Just stick around, we’re nice!

We have quite a few shiny new things for you to play with this time around if you are so inclined. A new and quite helpful tool can be found on the live image. It waits behind the new icon labeled siduction chroot helper. If we ask ourselves if we know the commands to start a chroot off the top of our head, most of us will have to answer with »no«. So, next time you need to fix your system because you lost your password or a malformed entry in /etc/fstab makes systemd cringe and refuse to boot, you start the live image and hit that icon. You are prompted to select the partition and after a safety warning are taken to your install as root, where you can start to undo any issues.

Nala as a new frontend for Debian’s package manager frontend apt. It works as a drop-in replacement, meaning that you can use the commands you are used to from apt also with nala. Apt gets the job done, but it is neither fast nor is it very user-friendly, when it comes to how it outputs its information.

Nala in comparison seems like apt on steroids. It is faster by using parallel downloads, has better output, that is presented in a user-friendly way. It also has a history function that was borrowed from Fedoras package manager frontend dnf. You can try out nala right now and if you don’t like it, return to apt any time. You can also use both, alternating between them. Some good reading about nala can be found on the website Linuxiac. Our manual also offers a section on nala here.

Snapshots of your running system, that you can roll back to, have been a thing in distributions like openSUSE with btrfs or the BSDs with zfs for many years. If you are using ext4 and making use of Timeshift, you get a similar result, but are limited on the options.

That is why we integrated snapper to handle snapshots if you install siduction on btrfs. We have written a very detailed manual page for this here. Basically, as default the system takes a snapshot before and after every action you take with apt (or nala), that you can roll back to through a GRUB module, if needed. You can also take snapshots at boot or manually. Besides that, you can also roll back single packages. There is a ton of options, as you can see when you read our manual section on it. A hands-on quick start can be seen over at SpiralLinux, as they use the same mechanism.

Currently, the installer does not offer the possibility to deselect packages that do not comply with the DFSG, the Debian Free Software Guidelines. This means that packages such as non-free firmware are installed on the system by default. The vrms command will list these packages for you. You can remove unwanted packages manually or all together by typing apt purge $(vrms -s) before or after installation. Otherwise, our remove-nonfree script can do this for you at a later time.

If you want to reuse an existing home partition (or another data partition), you should add it after the installation and not in the Calamares installer.

With some older Intel graphics processors on some devices, the system may freeze shortly after booting into Live. To fix this, you must set the kernel parameter intel_iommu=igfx_off before booting again.

Many thanks to all involved!

This is also thanks to you, our users. We would also like to thank Debian, as we stand on the shoulders of giants.
And now have fun!

Release Notes for the 1st Release-Candidate of siduction
2012.1.rc – Desperado

Release Notes for the final Release of siduction 2011.1 – One Step Beyond